The role of adventure is reaching far beyond individual experiences and is increasingly employed in the changing socio-political climate of charity, philanthropy, international aid, and development. In particular, adventure philanthropy is a subset of humanitarian and volunteer tourism that blends volunteerism, fund-raising, altruism and hedonism with adventure (and often endurance-based) tourism. As an alternative means of raising awareness and funds, charity organizations are turning to individual adventurers to partner in such activities. Although found worldwide, such events are especially popular within more developed countries, with recipients of the aid located elsewhere. This research examines several charity endurance events originating in North America and focused on causes in Guatemala, whereby the adventure philanthropists employ various means of tourism mobilities (walking, cycling, kayaking, horse riding) to both raise awareness and donations as they make their way towards their ‘destinations’ where those in need of aid await their arrival. While not articulated as ‘development’, the overall impetus of such activities hints at this as funds are directed towards projects meant to improve the livelihoods and the potential of the recipients (often children) who reside in the Global South. Thus, this research uncovers a number of discursive themes, namely duration and route, mobility rights, and spectacle that are used to frame the travellers’ journeys while also depoliticizing the social context of the destinations. In so doing, it raises questions about the changing nature of adventure – it the horizon of adventure experiences simply widening or are adventure experiences being co-opted for political purposes by more powerful organizations. 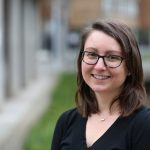 Jillian Rickly is Associate Professor of Tourism Marketing and Management at the University of Nottingham. She is a tourism geographer with interests in authenticity/alienation, ethics, sustainability, mobilities and wellbeing. She is co-author of Tourism, Performance, and Place: A Geographic Perspective (Ashgate, 2014), and co-editor of Tourism & Leisure Mobilities: Politics, Work, and Play (Routledge, 2016), Events Mobilities: Politics, Place and Performance (Routledge, 2016), and Authenticity & Tourism: Productive Debates, Creative Discourses (Emerald, forthcoming).

The theme of the conference invites us to ponder on what kind of role can adventure tourism play in addressing the different climates of change in the contemporary societies. Here, rhythms of staying overnight in outdoors are discussed in order to illustrate the manifestation of the sensitivities, which we develop when we spend time in nature. For example, the rhythm of conducting daily practices in nature is cyclical and slow, and it invites the nature tourist to a state of stillness. The stillness is not absent of movement, but it is absent of linear, hectic everyday time. The nature tourist reaches the stillness after few days in the camp, once the body gets used to the basic tasks afforded by the material objects of camping – such as making food over fire, looking for water, packing and unpacking the rucksack. The tasks that take place on a nature holiday should not be understood as resistance to everyday life but as processes of becoming in connection to particular materialities, to other people and to particular places – and as processes of becoming aware of the weight of the things, people and nature around us. Hence, could the rhythms that are lived in nature holiday environments also be enabled in modern everyday life – could we be forced to improvise with the waste we produce and with the things and people we have around, and forced to reflect on the consequences of our improvisation? 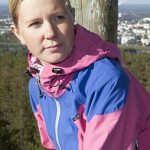 Outi Rantala is Associate Professor of Responsible Arctic Tourism at the Multidimensional Tourism Institute, University of Lapland. Her research has focused on nature relationship and rhythms of everyday and holiday through such phenomenon as wilderness guiding, touristic sleep, weather, adventure tourism, and architecture. She also has an active role in developing tourism education within the University of Arctic’s Thematic Network on Northern Tourism.

Courage is More than Small Change

Tove I. Dahl, Professor of Educational Psychology at UiT The Arctic University of Norway

Adventurers regale us with stories rife with magnificent contexts, monumental hurdles and mighty results. We eat it up and seek our own adventures – walking into novel territory, tackling daunting obstacles head on and coming out glorious on the other side. Other times, we satisfy the urge by engaging in “adventure light” – entering adventures where a positive outcome is assured, or simply imagining what living adventurously might be like.  Is part of the allure of adventure a fascination with the courage it takes to manage adventure and a wish to experience it, too? If so, what does it mean to be courageous? Though an age-old concept, recent research has cast new light on what the process of courage entails.  How might people feel as they approach daunting adventures, take them on, and reflect on them afterwards? Though this talk will not provide all the answers, it will introduce where research on courage is at today and its relevance for nudging cautious outdoor adventurers into actually realizing adventures made accessible to them. Ultimately, it could help us better understand potential adventurers who meet the outdoors with caution – either as newcomers to the outdoors or as veterans facing novel outdoor activities. It may also be useful for thinking about how we facilitate the courage sometimes needed to overcome looming obstacles in the pursuit of glorious outcomes. 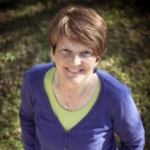 Tove I. Dahl is a Professor of Educational Psychology at UiT The Arctic University of Norway.  Her research interests span learning, motivation, language and culture with a focus on both theory and practice. Her work for the recently completed Northern InSights program funded by the Norwegian Research Council focused on interest, emotion and learning during tourist experiences. Dahl also works with the Concordia Language Villages (CLV), leading a language and culture immersion program for youth every summer. The heart of the CLV mission is to inspire courageous world citizens.

Re-Tinkering the Outdoor Experience.  My gradual ascent into chaos and vagabonding

Humphrey came across kayaking through school, and afterwards, as a member of his local canoe club, which was really a front for a far right religious group.  He and his friends left en-masse a year later and set up their own club…non-religious.  Their river chasing around Ireland brought him into contact with the mountains, when the rivers were just not wet enough.

Working in the outdoor sector in Ireland and Europe provided a platform to develop his kayaking and climbing interests, leading to the first of his kayaking expeditions to the Himalayas, and subsequent operation of commercial climbing and kayaking expeditions to the Caucasus and Siberia.  All of this helped fund his studies.  Glencoe, Aviemore and Fort William were the settings for his introduction to Scottish winter climbing, which encouraged his departure to big mountain routes in the Himalaya, Alaska and Karakorum. Between expeditions and by chance, he stumbled upon the delights of paragliding, and later paramotoring, eventually undertaking a series of extended, ill advised, illegal solo flights and crash landings across various central Asian countries.  Through this process he discovered the joy and freedom of vagabond adventure, and the generosity of strangers. 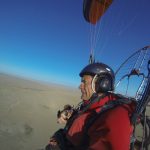 Humphrey has settled on the north west coast of Ireland and works in the development of national strategies and infrastructure primarily within the Irish outdoor recreation sector.  He also lectures in sport psychology and exercise science, but admits to being vaguely uneasy about the stabilising influence of such normalcy.  Marathon running helps, and mountain biking and sailing too, but the next expedition is never too far.  To date, he has led or soloed over twenty kayaking, climbing and paramotor expeditions in the Caucasus, Siberia, Alaska, Zimbabwe, South Africa, Karakorum, Mongolia, Kyrgyzstan, Ukraine, Moldova, Kazakhstan, China and the Himalaya.

Humphrey is currently completing his Masters Degree, in Big Data Analysis.  He holds a BA in Communications, an MBS in Business Development, an MSc in Exercise and Nutrition, as well as post graduate qualifications in Marketing and in Research Methods.